In the early day of 6th edition screamers and flamers were the damage dealers in an all Tzeentch army, but you were forced to take Pink Horrors to round out the army and score objectives.  Most daemon players would take other troops choices, but I remained true to my devotion to the changing tides of the aether.  I liked taking them in squads of 10-20 to keep them alive and deal some damage. I routinely ran a large blob squad of 19 horrors and the Changeling plus a Herald.  This was a mixed bag.

Now that I have a copy of the rulebook I can confirm the rules that have been leaked before.  Namely that they are now 9 points, minimum squads of 10 and gain ward charges as the squad size increases.

One big drawback is the loss of overwatch, but this is countered with the increased 6″ range on the shooting attack.

I’ll compare their efficiency against terminators, marines and guard.  Given that flamers and screamers were majorly hurt by the new codex the horrors will have to stand up to various threats if a Tzeentch mono-build is to remain viable.

Some complained that my comparison before factored in disproportionate squad sizes, and while this was true the point per kill levelled the playing field.  This time I will compare squads of the same point cost to please the nay-sayers.  It just so happens that you can get 17 new horrors for the same cost as 9 old horrors.  Since 9 is the number of Tzeentch there must be something to this… 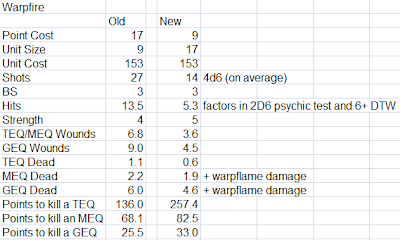 So, on the numbers, the unit is less efficient than it was before, but arguably has “maybe” some more flexibility depending on which phychic power you roll for.  The problem here is that before you could take a single bolt in a 5 horrors squad and camp an objective and provide some minimal anti-tank/air.  Now you take a large footprint unit that has a single power.
As you’ll see below adding a Herald becomes a must have if you want similar results as before (which wasn’t awesome to begin with). 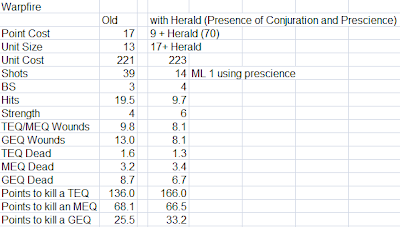 Now, if you add a Herald into a squad you can slightly outperform the old horrors on MEQ killing, but TEQ and GEQ remain poor by comparison.  The way this comparison works if with the Presence of Conjuration (+1 strength) and using Presience to re-roll your hits.  On avergae you will kill just about 3.5 MEQ in your first turn of shooting.  Then you had better charge your screamers in to finish up the squad, because as soon as 3 of your horrors die your shooting falls of the cliff (- 25% effectiveness).
Now, all of that being said all it takes is a D6 deny the witch to shut you down entirely.
I asked for random, but never in my wildest imagination did I see the much needless random.