Late last year I said Flamers were not OP here.  The world, and Phil Kelly disagreed.

I can only surmise that the WD Codex update was a ploy to sell models (of course it was) but broke an important compact with customers.  You can’t sell a shiney object and then smash it 6 months later.  It’s one thing to nerf a model or two after a 5 year codex cycle and entirely something else when done in 6 months. 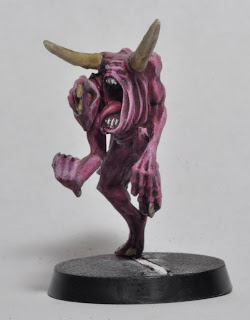 While screamers and flamers are the damage dealer in an all Tzeentch army, you have to take Pink Horrors to round out the army.  I like taking them in squads of 10-20 to keep them alive and deal some damage.  I routinely run squads of 20 horrors, which is a mixed bag.

The most recent rumors suggest:

Pink Horrors – 9pts each (minimum 10)
ws 3 bs 3 s 3 t 3 w 1 i 3 a 1 ld 7
Psychic tests on a 10
Brootherhood of sorcerers
Blue horrors: if a pink horror is slain place a blue horror marker.. at initiative 1 the blue horror attacks causing the enemy unit to suffer one s2 hit with ap –

horrors can only cast change dicipline, not divination.
horrors get 1 warppoint, 2 at unit strength 11-15 and 3 at 16-20. they generate psychic powers at the start of the game like normal psykers but can only roll on tzeentch lore.

primaris: 24″ s 5 ap 4 assault 2d6, warpflames, soulfire. 1 warpcharge.
for each additional warpcharge you gain a additional d6
So I wanted to see how the “new” units stacks up to the old as an MEQ killer.

Aside from the range difference (now 24″) and the fact that the new horrors will have more random results (pschic test, deny the witch, and random number of shots) what I found is that point for point the new (when taken in a squad of 20) has about a 20% worse first turn killing efficiency vs MEQ than the old Pink Horrors.  This does not factor in taking a Herald with divination.

The unit is almost 40% worse at killing Guard Equivalent in a 5+ cover.

So, on the numbers the unit is cheaper, giving you more flexibility, but not quite as good at these tasks.  You can buff with a Herald if you want (see above right).  As soon as you take a wound you shooting drops of by 75% immediately, rather than in a linear fashion (model by model) but you have access to other powers as well beyond the normal Bolt of Tzeentch and you range is extended by 6″ giving you some more holding power and reducing the risk of deepstrike mishaps.

I figured I’d take a look at the potential for each result on the Warpstorm table to occur.  The percentage chance of a result occuring at least once doesn’t change with more rounds.  I started down that path initially but had to remind myself of come basic college math.  Now, the odds of a result occuring a specific number of times (greater than once) during a game of varying length does change.  I’ll leave that for another day.

Now, assuming that your enemy has at least 6 units on the board (on average throughout a game – for giggles) you’ll have an 8.33% chance that an enemy unit will take a hit at least once during a game.  Granted it will be a random unit and a random hit type from the 4 types above, but that’s still something. 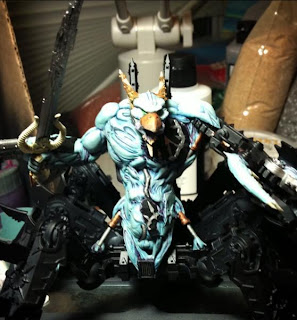 The tail end of 5th Edition and all of 6th Edition has been good for my Tzeentchy Chaos Daemons.  I’ve enjoyed the book for what it is – not like anything else.  My only real hope for the new book is that it continues to be very different from everything else.  Aside from that I’d love to see some real synergy between Daemons and Chaos Marines.  I’m still bummed that we didn’t get DA Fallen and we don’t currently get Traitor Guard in 6E; hopefully in the next edition of the book in a few years.

In my opinion the upcoming CD codex will be a success if (in no particular order):